THE END OF THE LAND

I have been photographing the unique geology and beach of Porth Nanven since 1996. I am fascinated by the transient nature of a fresh landscape created anew by the receding tide and how the winter storms shape this intertidal zone. Exploring a landscape that I know will disappear in a matter of hours is a magical experience and no matter how many times I visit  I continue to see something different each time I am there.

"...Nadolski has shown himself to be a perceptive observer of the landscapes most subtle variations, each shot personal, pure and self contained. With the wash of a constantly moving sea...
the photographs take on a condition that begins to approach music." 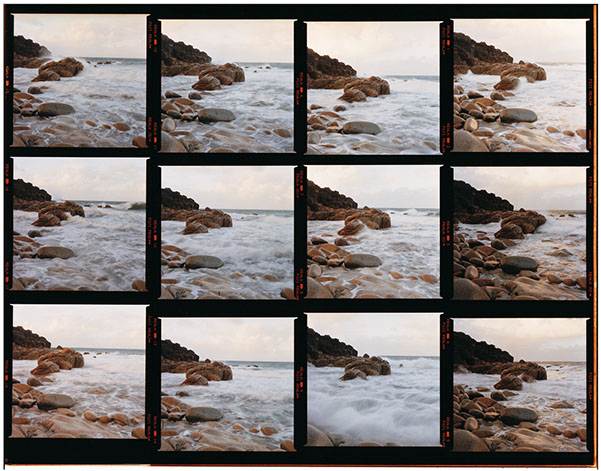 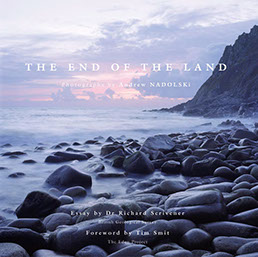 £29.99 + £14.00p&p
Please note: Orders outside Europe will be sent surface mail. If you require  faster delivery please email for details. 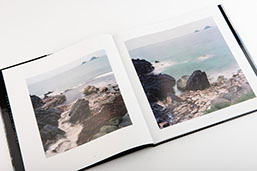 Early analogue contact sheet showing the  range the differing tide levels (and light) over a few minutes.
Frame 9 shows  the freak wave that moments later soaked me up to to my waist!

The following interview was recorded by Gabriella Woodcock  in 1998, just two years after I had started photographing at Porth Nanven, and represented some of my initial ideas:

G. Tell me about the area in which you are photographing.

N. The photographs are all taken in a small part of the coast, near St. Just, right at the far end of Cornwall.

G. This is obviously where the title ‘The End of the Land’ originates from.

N. The reasoning behind the title is twofold, it serves initially to place the work in a geographic location, and secondly on a conceptual level as a ‘lead in’ to a train of thought.

G. So what exactly are you trying to get people to look at?

N. The work is a conceptual and physical exploration. This area between two landscapes is a transitional place. The sharp angular granite at the end of the land, as it comes to the point of the tidal zone, begins to change form. It becomes softer, in a sense more organic. There almost seems to be an awakening.

G. So why this fascination with this transitional zone?

N. What seems to draw me is this place in between two places. There is the granite landscape, which is in itself spectacular, and then there is the sea, which depending on when you’re there can be either violent and raw or calm and beckoning. It is a tempestuous force.

I climb down the cliffs of this remote area to a beach which for most of the day is underwater. I wait for the tide to go out so I can explore. I don’t know what sculpted patterns are going to be left in the sand, or how the rocks will be arranged and balanced. I go there uncertain of what I’m going to find.

When the tide goes out it is almost as if a door opens onto a land we would not normally experience. It is a place where a fresh landscape is revealed, it is created. It will live but it is finite. It will disappear when the tide returns. These particular arrangements and patterns will not exist in the same form again.

When you dive to the bottom of the sea, even when it is rough on the surface, it can be calm on the bottom. The patterns in the sand echo the waves and the flows of the currents. When I’m exploring I feel that I’m entering an underwater landscape.

G. There is a real air of expectancy in your photographs.

N. I remember when I was young, an episode of ‘Stingray’.The puppets were exploring a huge opening that had appeared in the sea bed and for some reason the sea disappeared or was temporarily sucked away.They were walking on dry land at the bottom of the sea. All the time there was an awareness that this force was coming back.Time is part of the work.The sea is returning.You are there and you have a limited amount of time to work.That’s how it feels, there

is an expectancy in the landscape.

N. Photography is often seen as a medium that creates a frozen moment in time, the action of the shutter freezing, Cartier- Bresson style - ‘the decisive moment’. In a sense with this work I am exploring ‘the indecisive moment’.When you physically experience this landscape, you don’t see it in frozen moments, the sea is moving.To freeze it is almost the wrong interpretation of it, that is not it’s essence. What I am trying to show with the shots of the sea is this movement and a sense of flow.With the static shots there is a calm, there is a quiet, but it is a period of quiet, not a

G. Do you think that this work needs to be viewed as an entirety or are you quite happy that each piece be viewed separately?

N. There are images which do seem to flow naturally in a certain order. I have always felt that I was working on some sort of visual poem or song, in the sense that it communicates in an emotive way. I also want to try and echo the natural rising and falling of the sea. That is why I’ve sequenced it with close-ups of rock formations, then drawing back to more general views, as though the images begin to form the verses and chorus.

G. You aren’t going to be able to get away from the fact that people are going to read this body of work as a metaphor for something else.

N. In a conceptual way it’s two opposing forces, that in their point of meeting create and shape something. The realm I’m exploring is changing, it’s different each time I visit. Sometimes there’s tension, sometimes balance and calm. Within the meeting of these two forces there is this middle bit that is in a sense a glorious coming together. It’s the bit in between, this crossover, this relationship. I suppose it is some sort of metaphor for relationships. This combining of two differing individuals, and the marvel of what is happening between the two. So although the work is entitled ‘The End of the Land’, I want to raise the question ‘Is it the end of the land or the beginning of the sea?’ The answer is that it’s both. 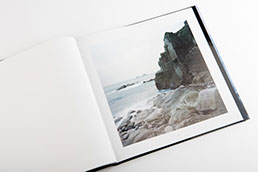 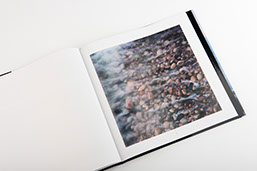 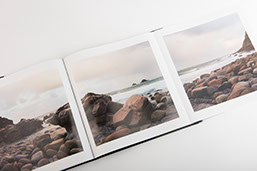 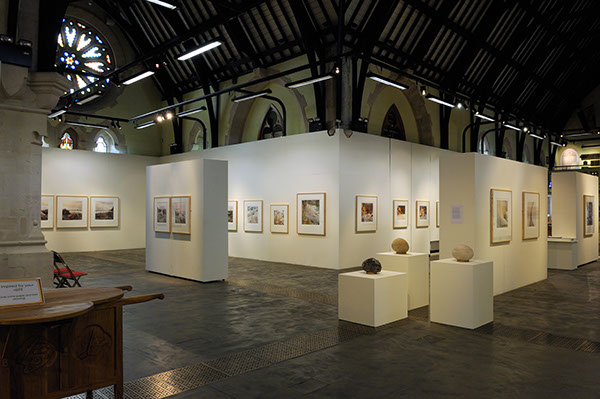 “The small cove of Porth Nanven, west Cornwall, is as visually remarkable as it is geologically singular... its raised beach and abundance of rounded granite boulders reveal a timelesness of elemental forces and their ability to shape land and seascape... large, square format prints bring us as near as might reasonably be expected to the sensation of standing on that particular rock strewn beach. It is selectivity and discrimination in composition, depth of field, quality of light and exposure that so distinguish these works... this superb exhibition will appeal to all who have ever gazed at the edge of the land and the reach of the sea.”

"The End of the Land had as an exhibition, and has as a book, an intellectual and artistic depth that confirms my belief in the power of landscape photography.

...His work is living proof that powerful work is the product of clear thinking and passion, not technical or aesthetic gimmicks."